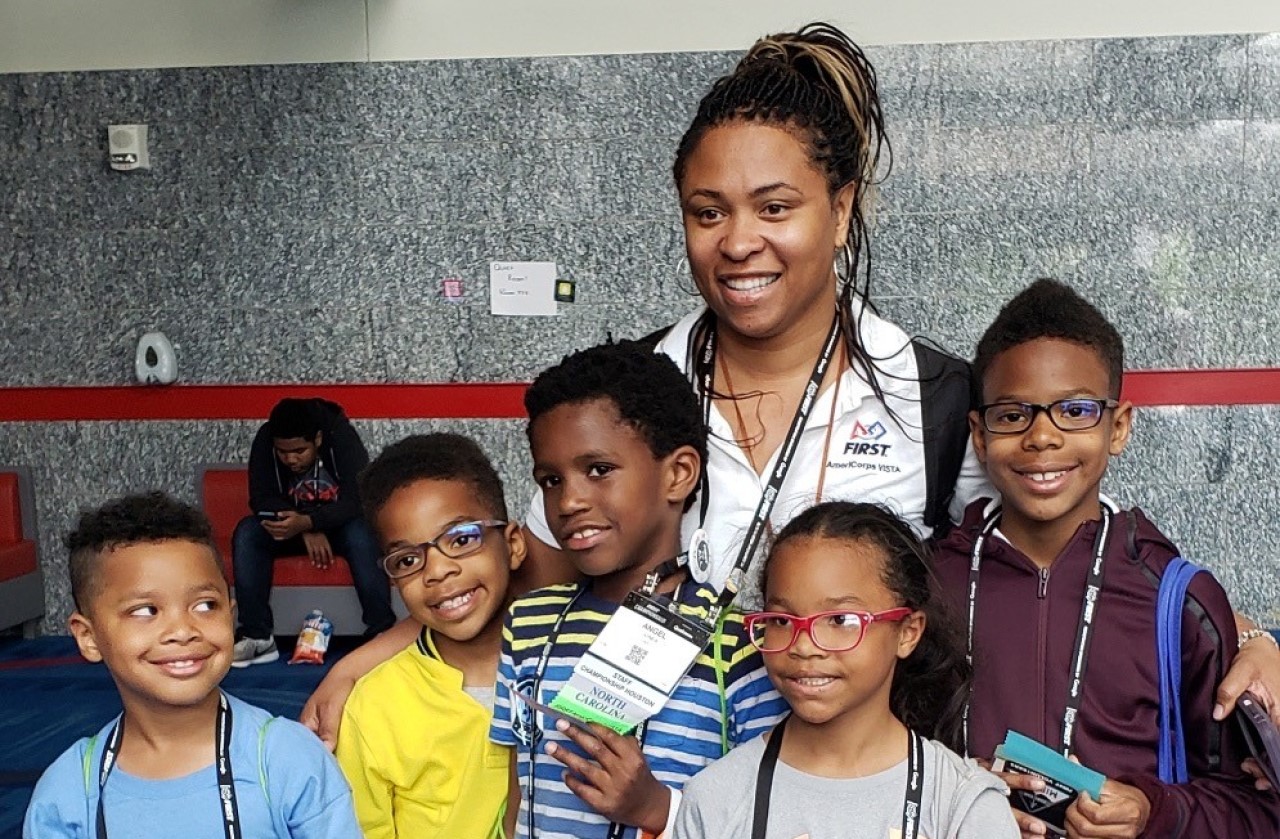 Angel Jones has spent the last five years serving in the FIRST® Americorps VISTA (Volunteers in Service to America) program in a rural and underserved region in North Carolina. The VISTA program seeks to expand the vision of FIRST by working in areas that have been deemed underserved: lower socio-economic communities, rural areas, and areas that have little to no support or resources to be able to easily access STEM initiatives. Through FIRST, students gain the skills and courage to forge ahead and be game changers.

And Angel has seen that happen in real time. In her first few years as a VISTA, she focused on building capacity. She started out mentoring FIRST® LEGO® League teams and helped developed programs in the local school system. She then moved on to supporting and mentoring FIRST® Tech Challenge and FIRST® Robotics Competition teams. She had to do a lot of work to spread the word about FIRST, but found that parents and students alike were excited to learn about the opportunities FIRST provided.

Going to competitions as a mentor of a FIRST Robotics Competition team from an underserved area with little resources was eye-opening. Learning what was possible and seeing what teams could build, she began looking for ways to connect with other teams and build partnerships. Their team took what they saw and brought it back to their own community to try to implement. "It's all about the foundations, giving kids access to engineering and learning the engineering way of thinking."

Angel has worked with local schools to build programs to better prepare students for success. "Being a mentor in an underserved area means having to deal with real-life issues students face," Angel says. "Transportation, spotty internet connectivity, and low resources are all challenges. You have to figure out what obstacles students might face that would prevent them from participating in FIRST in an equitable way." Angel helped develop a program that taught financial principles through building a FIRST LEGO League team. "You can use the FIRST platform to teach about any aspect of life, from learning how to budget to programming. Introducing kids to FIRST early on can prepare them for success in college and beyond."

She has seen that students are learning more than just college readiness skills, though. "Teaching students to express themselves through building something is highly effective. We used lesson plans provided through FIRST LEGO League where students would build in response to certain challenges or prompts about how they were feeling. We adopted the phrase, 'expression negates aggression,' and found that students who had opportunities to express themselves through building developed skills to better handle emotional and behavior challenges. It gave them a platform to be expressive and made them feel important when other kids were listening to them talk."

That's what has Angel hooked on FIRST. "As a mentor, seeing kids develop and build something gives you purpose and helps you feel fulfilled. Being a mentor plants a seed that lives way beyond you. It gives purpose to your existence. Hopefully I will live a long time, maybe even to be 100 years old, but if I can impart something in the younger generation, then that seed will grow far beyond the years that I can physically live. And that's what gives me hope."

Celebrating our 2021-2022 FIRST Volunteers of the Year