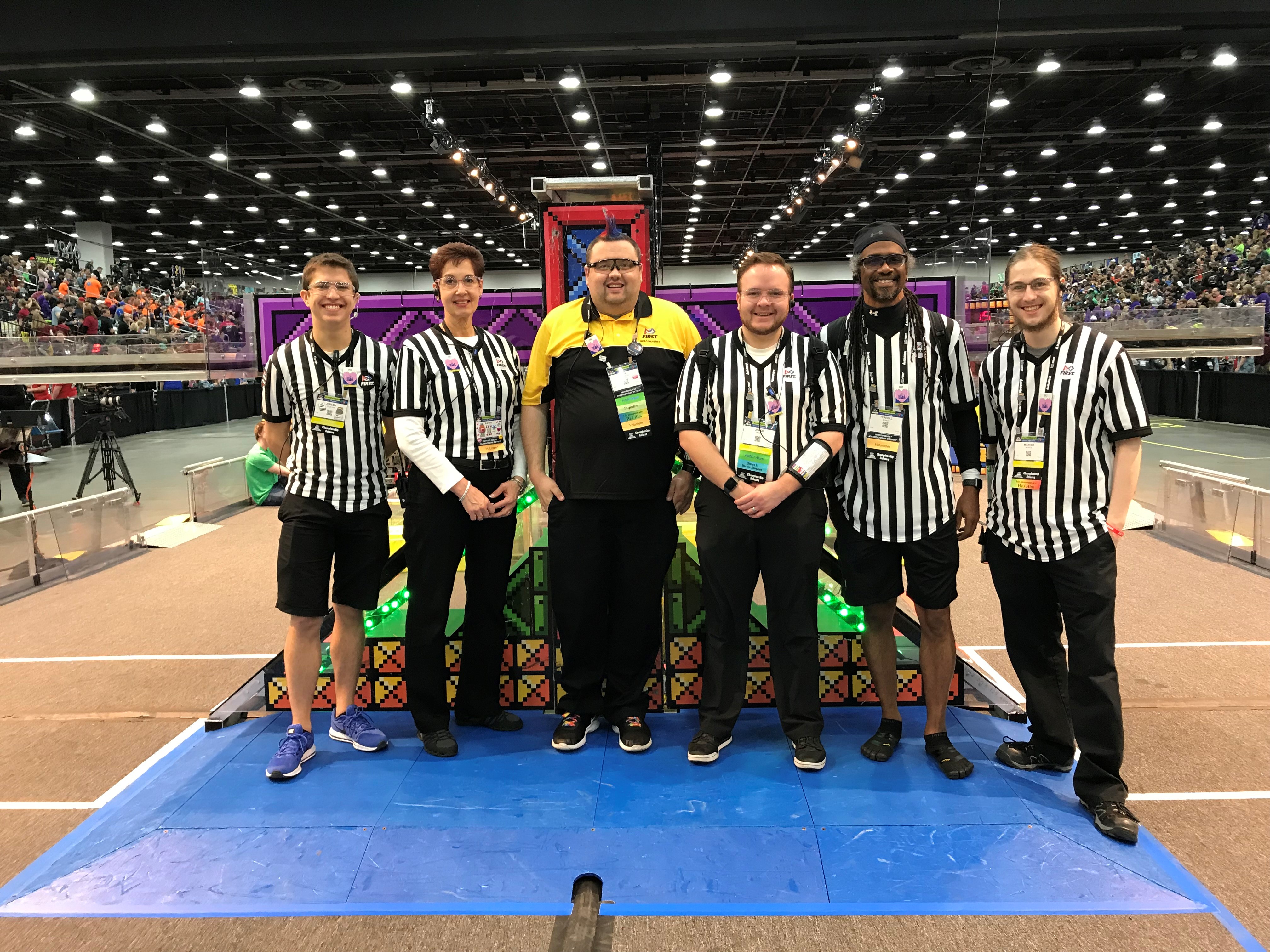 Jon Kentfield is originally from Connecticut, but now resides in Kokomo, Indiana, and works for FIRST Crown Supplier AndyMark. Read on to learn about Jon’s experience as a FIRST® volunteer at local events and at FIRST Championship as well as being an alumnus.

When did you start volunteering?
I started volunteering in 2003 as a field reset/repair person at the 2003 FIRST Championship in Houston. I was a sophomore in high school and didn't have a whole lot to do as a member of the team. They needed help that year, and so I volunteered to help out while I was there. Getting the experience of being on the floor, in the action, at a championship, was something that just stuck with me, and made me continue my volunteerism through high school, college, and now as an adult working for FIRST Crown Supplier AndyMark.

Why did you start volunteering?
I started volunteering because there was a need for more help at the FIRST Championship. I felt that it would be a unique experience for a high school student and give me a sense of accomplishment that I don't think I would have received with my team that season. I keep volunteering because of the lifelong friends and connections I was able to make as an alumnus.

What do you think is the most rewarding part of being a volunteer with FIRST?
The most rewarding part of volunteering with FIRST is the feeling of giving back to a community that gave me so much. I have since gone on to co-found The Rainbow STEM Alliance, a 501(c)(3), with two of my fellow alumni and volunteers, Tom Wexler and Brian Boehler. I had the privilege of meeting both of them while volunteering, one at the 2013 FIRST Championship and the other at a FIRST® Tech Challenge Qualifier in Indiana. Our non-profit is dedicated to supporting LGBTQ+ students pursuing STEM, and a large part of our focus has been supporting the LGBTQ+ of FIRST student group and our successful lapel pin campaign. Seeing the impact of something smaller than a quarter has been profound. To let young LGBTQ+ students know they are not alone, and to be a role model for them as a key volunteer in FIRST and working for a Crown Supplier has definitely been one of the most rewarding experiences in my life.

What advice would you give to a new volunteer?
Ask questions often. People may not know you're interested in a role unless you talk to them. Everyone had to start somewhere, so ask about their experiences and what led them to that role. Having worked in many districts and regional events, there are always places to grow.
It could take time to discover what volunteer role you want to play, so don't be afraid to try out new roles if they interest you. Also, don't be afraid to venture into other programs. If you are only familiar with, say, FIRST® LEGO® League Jr., see if you can help out at your local FIRST Robotics Competition event. There are always ways to help out, even if you can't give back to the program you are most familiar with!

What is special about volunteering at Championship?
Volunteering at FIRST Championship is such an amazing experience. You have the opportunity to meet people from all over the globe who are coming together for a common purpose: to promote STEM education. This past season, I was honored to receive a head referee position for the FIRST Robotics Competition at the FIRST Championship in Detroit. I got to work with an amazing field crew from all over, including Michigan, Minnesota, California, Ontario, and more. Our field received numerous high-profile visitors, including the Secretary of Education for the United States. Not to mention the times I have been able to speak with high profile FIRST staff and advisers like Dr. Woodie Flowers, Dean Kamen, Don Bossi, and Frank Merrick. You never know who may pop by your field to check out the action, like will.i.am.

What is your favorite thing about the Championship event?
Being such a long-time volunteer and alumnus, FIRST Championship is a homecoming mixed with a family reunion. Many of my friends have flung themselves all over the world and the FIRST Championship is the one event that will always get us back together. I would say that is my favorite thing. Being able to reconnect with so many people and make new connections with others in the industry has definitely been a privilege.